In short: it has been a life changing experience, a great challenge, and a great joy.
I learned to be amazed again. Amazed by my actors who portrayed their characters with such originality, poetry, intensity and purity, as well as with great humor and anarchic wit. It has been like coming back to the sources of creativity which go back to childhood, to our innermost human core - and human we all are, if you define us as disabled or as normal. And aren´t we all  - in one way or another - handicapped? Least neurotic and emotionally starved….

Working with the special actors from the unique Thikwa company has liberated my creative spirits and made me re-discover one the secrets of theatre:  it is about giving up control- not an easy task for a director - and surrender to playfulness, to utter honesty and to the excitement of uncertainty. And what a creative adventure it became! 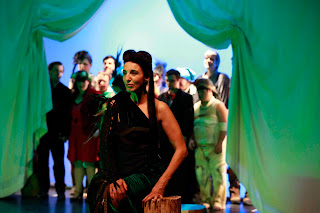 5 professional guest performers joined the cast of 15 disabled Thikwa actors. Within a 2-months rehearsal process, the performance emerged almost organically.
It was a mix of improvisations, text-analysis, physical work-outs, trips to the forest and discussions about love, jealousy, men and women - all based on Shakespeare´s formidable play. We laughed and cried a lot during those weeks.
Conceptually, I kept the narrative and the 5-act-structure of the play, yet I modified the scenes and  looked for their essence to create physical, visual and acoustic images for the emotional states and confusions of the protagonists.

Theseus and Hippolyta  spoke Shakespearean language (in Erich Fried´s poetic translation), yet the lovers and craftsmen used their own day-to day language, inventive and witty and straight to the point!


Never did I compromise on artistic standard, quite the opposite. I was lucky to collaborate with composer Antonis Anissegos, who wrote mesmerizing electronic music, and Isolde Wittke, who designed with great intuition a versatile and abstract set - a  cosmos true to Shakespeare´s "all the world´s a stage".

During the work process, a deep emotional and artistic bond emerged between the performers and me. When rationalizing and intellectualizing became difficult, I had to surrender to the truth - my own emotional and creative truth as well as theirs. And thus my sensitivity and perception heightened - both as an artist and as a human being.


This unique emotional bond connected the entire cast - disabled or not. Performers of various artistic background -  opera, drama, experimental dance - and with very different mental and physical capacities, became one team - spirited and joyful and fiercely wanting to perform. And this - luckily - conveyed itself to the audience - who sat happily through 2,5 hours of variations of Shakespeare.

Notably Torsten Holzapfel - a member of the company for many years- touched the audience´s heart with his overwhelmingly moving and funny performance of Bottom, the weaver.

And then the young lovers,  most of them still inexperienced in acting, autistic, with down syndrome, and cerebral damage, they all displayed an energy and talent on stage, which was breathtaking.

After 17 representations in autumn 2011 in Berlin - and two shows within the framework of the festival "No limits" -  the production was shown again in July 2012 with sold out performances each night.


Anke Rauthmann is stage director and librettist working on commissions for Opera Bonn, Mecklenburgisches Staatstheater Schwerin and Komische Oper Berlin. She directed for Opera Fürth, International Vocal Arts Institute in Tel Aviv, Rossini Festival in Wildbad, Open Air Festival OperOderSpree as well as for the Royal College of Music in London. She is chairwoman and artistic director of the Berlin International Opera. Anke Rauthmann is also an actress and in 2010 won the first prize with the German-Israeli play Schweigeminute by Hila Golan at the Akko Festival in Israel. She is a member of the International Theatre Institute (ITI) in Germany.